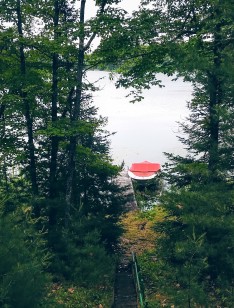 “Hey. You probably already have Fourth Of July plans…but would you want to come to our lake cabin this weekend…?”

Previous plans are irrelevant when the words “lake” and “cabin” are involved.

Landon’s grandpa built this house in Land O’ Lakes, Wisconsin back in 1940 something… and the place has not been touched since. Whitney refers to it as “glorified camping.” But it’s on a lake, with a dock, and it’s free. So I could care less that the sink water smells like sulfur, and the wallpaper is peeling off, giving it this creepy dollhouse-vibe. At least the place has running water.

How much is that Doggie in the window?

My only price for entry was a case of beer and some chips. Someone had already been assigned the meat and cheese, or I would have offered to get that, too. Can’t have a weekend in Wisconsin without 16 pounds of summer sausage and cheddar cheese.

I got into town around 8 on Thursday, and by 8:15, I was at the local watering hole, Black Oak Bar, with an Old
Fashioned sour in hand and an order of cheese curds and ranch on the way. By 10 PM, I knew the whole town.

We woke up on Friday and did what we always do after a night out with Whindon: we used the breathalyzer. What was a gag gift, has proven to be the most comical and valuable tool in all party settings. Only one of us was sober enough to drive to get fishing bait. I’ll let you guess who.

So we fished (AKA watched Landon put leeches on the hook and cast the poles for us), while the girls laid around tanning and stopping Bella from jumping off the boat. I’ve seen few things as comical as a 15 pound dog growling at waves…

In typical Wisconsin fashion, we went out for Friday Fish Fry, then headed to the barely-there-airport lawn for

fireworks. Then back to the Black Oak Bar, where we said hi to all our best friends from the night before. Ya know, askin’ Brenda how the kids are and such.

The rest of the evening is a mix between hazy and crystal clear incriminating disaster. Maybe we will leave it at “you just had to be there…”.

The rest of the weekend was typical Lake Life activities. Tiniest Fourth of July parade I’ve ever seen. Being pelted by kiddies throwing tootsie rolls as hard as possible. Hangover burgers. More fishing. Lots of beer. Consuming all 16 pounds of cheese and summer sausage. Card playing. Selfie sticks. Shake & Takes. Making up dialogues between the glass ducks that decorate the living room window (decorations that Landon’s mother has forbid anyone from touching). Profane pictures and stories that I’ve purposefully left out. Some of these things being more typical than others… 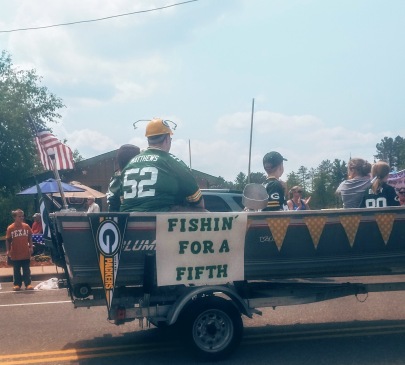 Selfie Stick. For the WIN.

Dezzy is Whit’s little sister. And the closest thing I have to a spirit animal.

The infamous Shake and Take

Don’t be fooled. This little baby was hefty. We threw everything we caught back though. Apparently Whindon only believe in catch and release…a tactic that still doesn’t make sense to me. Maybe I am still too traumatized from deer hunting. I thought all “catches” ended in a kill…and a meal.

Thanks Whindon for an unmatched Fourth of July weekend and for exposing me to the glorious place known as Land O’ Lakes. I hope the Black Oak Bar will let us come back.

1. If I blog, someone will eventually discover me. 2. If someone eventually discovers me, I will become rich and famous. 3. If I blog, I will become rich and famous. Follow me for shorter, daily doses! @melisslyss
View all posts by Melissa Faulkner →
This entry was posted in Uncategorized and tagged Beer, Black Oak Bar, boating, cabin, fishing, fourth of july, Fun, lake, lake life, land o' lakes, Sconnie, Wisconsin. Bookmark the permalink.